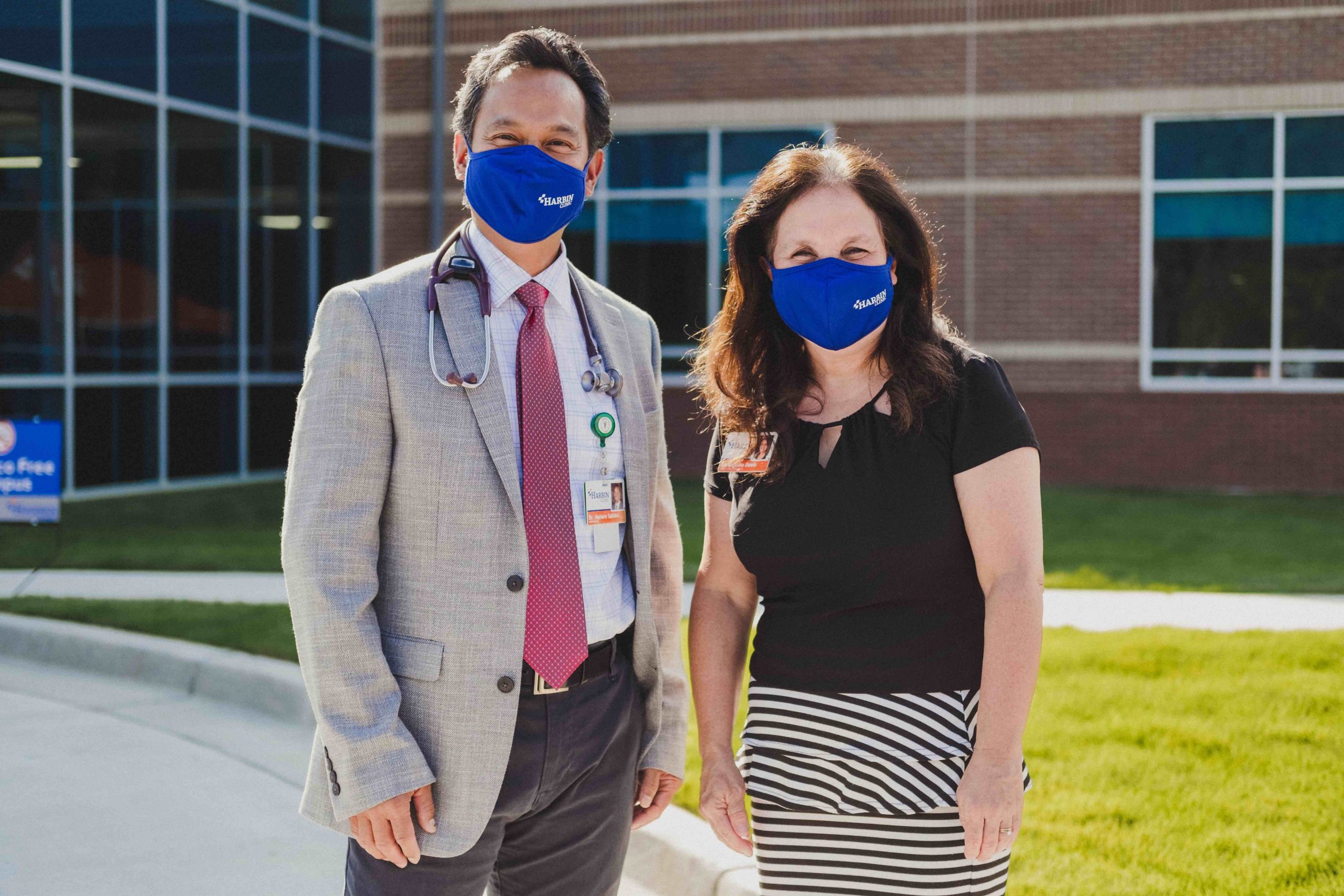 Harbin Clinic has been committed to providing excellent and innovative patient care for more than 100 years in Northwest Georgia. Each year, people throughout Northwest Georgia, Northeast Alabama, and Southeast Tennessee choose Harbin Clinic for their healthcare needs, not only because of our excellence in medical science, but also because our team of healthcare professionals is dedicated to caring completely for you and your family.

From daily decisions about patient care to strategic decisions about long-term direction, physicians are leaders on every level and through every endeavor at Harbin Clinic.

Our Board is comprised of ten primary care and specialty physicians, and is chaired by an 11th physician. Other crucial management areas such as quality, technology, finance, hospital relationships and day-to-day operations are also steered by physicians, with the support of a strong administrative team.

It is our vision to become the preeminent medical provider in the region, and to extend our role as a respected leader in the community.
We will achieve this through our commitment to:

Cultivating our physician leadership from within and empowering the continuation of our unique model of care.

Leading socially responsible initiatives that allow us to care for the community while expressing these commitments to our organization.

Through an innovative operational structure, we will provide best-in-class care that improves the overall health of the communities we serve. President & Chairmen of the Board

At Harbin Clinic we are dedicated to building healthier lives and communities. For more than 150 years, Harbin Clinic has served the people of Northwest Georgia. We have a deep commitment to providing the highest quality health care services to all our patients safely, effectively and compassionately.

The first Harbin to practice medicine in Georgia was Dr. Wylie Reeder Harbin, who was born in Fairplay, SC, on April 25, 1832. The First Harbin in Georgia

Dr. Harbin’s education included studying medicine under Dr. Robert B. Maxwell, a country doctor in Fairplay, and graduating from the Medical College of South Carolina in 1858.

During the Civil War, he served in the 7th Regiment South Carolina Cavalry. He saw action in the skirmishes along the north side of the James River and in the battles from Richmond to Appomattox, VA. He was captured in Farmville, VA on the Saturday before the surrender and remained a prisoner until news that the war was overreached the prison. After he was released, he walked more than 350 miles back to his home in South Carolina.

Thomas Witherspoon Harbin, the eldest child, did not become a doctor. Instead, he successfully organized and built the Echota Cotton Mills in Calhoun. He also became a judge, state senator, and religious leader, playing an important part in the development of Gordon County. After attending Harvard Medical School, Judge Thomas Harbin’s son, Robert Maxwell Harbin II, was briefly associated with the Harbin Hospital in Rome from 1922 to 1924. He later became a professor of orthopedic surgery at Western Reserve College in Cleveland, Ohio.

Dr. W. R. Harbin’s second son, Robert Maxwell Harbin, Sr., M.D. (1864 -1939), was educated at the University of Georgia and the Bellevue Medical College of New York City. He returned to practice with his father in Calhoun in 1888. In 1894, Robert Maxwell Harbin, Sr., M.D., moved to Rome to set up practice.  In 1897, he invited his younger brother to join his practice.

William Pickens Harbin, M.D., was actually the first Harbin doctor to be born in Georgia (on October 11, 1872, at his father’s farm in Gordon County). He received an A.B. degree from the University of Georgia in 1894 and a Medical Doctorate from Bellevue Hospital Medical College of New York City in 1897.

In 1897, William Pickens Harbin, M.D. (later known as Dr. Will) accepted his older brother’s offer to join his surgical practice in Rome, Georgia. Shortly after arriving in Rome in 1898 and borrowing money from his brother to begin his medical practice, Dr. Will left Rome to accept a commission as acting assistant surgeon in the United States Army during the Spanish American War. He saved his military pay, repaid his brother’s loan, and returned to Rome after the war in 1901. The first practice location for the two Harbin brothers was on the second floor of the building at 206 Broad Street (adjacent to the current Wyatt’s building). Prospective patients would call from the sidewalk to learn if one or both doctors were in before walking up the stairs. Some interesting facts about how the Harbin brothers practiced medicine:

The forerunners of modern-day ambulances, two low-style buggies, each with a pair of horses and waiting drivers, were always parked on the sidewalk in front of the building, ready to race the doctors to the home of patients in need of medical attention.

The cost of an office visit was usually $1. Home visits were $2 to $3. O. B. cases were $10 to $ 30. Often bills could not be paid until the cotton crops came in. When people paid in full at the time of service, they expected a cash discount.

Smallpox, diphtheria, typhoid, pellagra, tuberculosis, and diabetes were common diseases of the time. Diagnosis depended on active symptoms, physical findings, and sputum examinations. Hypodermic syringes could not be boiled as the plungers were made of leather. Needles were wiped clean with alcohol.

The Harbin brothers established the Harbin Hospital in 1908.

The Harbin Hospital is Founded

The original hospital occupied a former residence at the southeastern corner of Third Avenue and First Street and had 12 beds.

In 1919, a new “state-of-the-art” four-story, fire-proof building was constructed next to the original hospital at the cost of $90,000. The original hospital was turned into a dormitory for the nurse training program that had been established in 1911.

In 1920, three additional stories were added to the structure, raising the bed capacity to 75. The seven-story building was Rome’s tallest structure. According to George Magruder Battey’s history of Rome, “the new Harbin Hospital was a marvel of sturdiness, architectural beauty, and completeness, and is highly symbolic of the character of work performed by the staff.”

The building contained every modern convenience of the time, such as vapor heating systems, electric lights, silent call systems, hot and cold running water in each room, linoleum floors, three operating suites, large sun parlors on three floors, and a private telephone exchange. The safe-gate elevator ran from the basement to the roof.

In 1921, the Harbin Hospital was recognized by the American College of Surgeons as one of only four hospitals in Georgia to meet the board’s standards of excellence. Georgia Baptist and Grady Hospital in Atlanta and the hospital at the Medical College of Georgia in Augusta were the only other Georgia facilities listed.

Franklin D. Martin, M.D., director of the American College of Surgeons wrote the following comments in his 1921 review of the Harbin Hospital:

“Your splendid work and the fruit of it, which are apparent in your community, must afford you more gratification than the stamp of our approval ever can.”

In 1921, President Warren G. Harding declared “Hospital Day” on May 12 as an occasion for opening hospitals across the country to visitors to demonstrate methods of examination and treatment of patients. At that time the Harbin Hospital housed dozens of soldiers who had recently returned from service during World War I. It was decided that “Hospital Day” would be an appropriate time for the staff and patients to wear red poppies to honor fallen soldiers, especially with the national Memorial Day observance coming up on May 30.

More than a dozen nurses conducted tours of the hospital, showing visitors everything from the basement to the fireproof roof. The basement housed the laboratory and X-ray rooms, as well as the kitchen and dining room.

In 1919 the Harbin Hospital had been the recipient of a philanthropic gift from J. P. Cooper (local cotton broker and founder of Darlington School) of 100 milligrams of radium and a deep X-ray therapy machine, costing $11,000. Very few places in the country offered cancer patients innovative radiation therapy treatment. The “Hospital Day” records from 1921 showed that 106 patients had been given radium treatment since the program’s inception.

Other records displayed to the public on that day included the hospital statistics for the month of April 1921.

The Harbin Hospital has associated many fine physicians through the years who contributed a great deal of medical knowledge and expertise to help keep the hospital on the cutting-edge of treatment innovations.

Dr. Lewis came to the Harbin Hospital in the spring of 1920 to establish the department of internal medicine and diagnosis. He had just returned from a tour of German prison camps after World War I – at the request of the United States government – to report on sanitary conditions there.

In 1925, the Harbin Hospital’s eighth biennial report told of an innovative orthopedic program that followed the treatment of bone fractures with physiotherapy (known today as physical therapy). Miss W. Watson, who had received her training at the Boston City Hospital, was in charge of the physiotherapy department that offered treatments including diathermia, auto-condensation, and massage.

Dr. Robert Harbin died in 1939, and Dr. Will suffered a fatal heart attack in his office at the Harbin Hospital on November 5, 1942. With an expansion of the county-owned facility, Floyd Hospital, to 120 beds, the decision was made in 1948 to transform the Harbin Hospital into a medical clinic, where physicians would see and treat patients on an outpatient basis with no overnight care.

The 1948 change prompted extensive renovation within the 40-year-old building, including an air-conditioning system, and tearing down the original Harbin Hospital (now the nurse’s dormitory) to make room for more parking. The Harbin Hospital School of Nursing was also discontinued at this point.

The 1948 Rome News Tribune offered this statement: “The clinic will be a unique establishment for this section, offering a complete unit of doctors and all medical facilities available under one roof.” The clinic was to offer complete diagnostic and treatment facilities including radium, enlarged laboratories, X-ray, and electrocardiographic equipment.

In 1969, a “contemporary” 34,000 square foot building was built on an eight-acre tract obtained from Berry College at the corner of Martha Berry Boulevard and Redmond Road. The new clinic was “a joint venture of the staff of the clinic to help meet the growing demand for medical services in the northwest Georgia area.”

The 1969 building provided office space for twenty doctors and a dentist, plus central services and a leased pharmacy operated by Enloe Drug Stores.

Today, Harbin Clinic has grown to include more than 240 medical professionals across more than 37 specialties. The Clinic cares for the health of patients throughout northwest Georgia and into Tennessee and Alabama.

While already maintaining the lead in providing the latest technology in cancer care to patients of Rome and Northwest Georgia, the Tony E. Warren Cancer Center is the premier destination for patient-focused cancer care and support services. With cancer patients in mind, the cancer center is designed to meet patient needs at all points of their care.

Specialties and services located in the cancer center include the offices of our medical oncologists and their Infusion Center; our radiation oncologists and their Radiation Oncology Center with two Varian linear accelerators; an imaging center with a new PET/CT scanner; and a state-of-the-art imaging device for detecting cancer. “The presence of this scanner in the cancer center clearly indicates how this is a community effort, as the scanner is jointly owned by Redmond Medical Center, Floyd Medical Center, and Rome Radiology,” said Dr. Davis. Located on the third floor of the Cancer Center is the Floyd Breast Center. There is also a conference center that will host Harbin’s multidisciplinary lung and breast tumor cancer conferences.

In Good Company is a special program through which we partner with area businesses that share our passion for engaging with the community to improve our quality of life. Through these partnerships, we are developing healthy workplaces, instilling an appreciation for culture, and promoting a passion for learning.